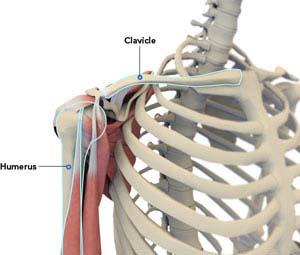 The shoulder is the most flexible joint in the body that enables a wide range of movements including forward flexion, abduction, adduction, external rotation, internal rotation, and 360-degree circumduction. Thus, the shoulder joint is considered the most insecure joint of the body, but the support of ligaments, muscles, and tendons function to provide the required stability.

Bones of the Shoulder

The shoulder joint is a ball and socket joint made up of three bones, namely the humerus, scapula, and clavicle.

The scapula is a flat triangular-shaped bone that forms the shoulder blade. It serves as the site of attachment for most of the muscles that provide movement and stability to the joint. The scapula has four bony processes - acromion, spine, coracoid and glenoid cavity. The acromion and coracoid process serve as places for attachment of the ligaments and tendons.

The clavicle bone or collarbone is an S-shaped bone that connects the scapula to the sternum or breastbone. It forms two joints: the acromioclavicular joint, where it articulates with the acromion process of the scapula and the sternoclavicular joint where it articulates with the sternum or breast bone. The clavicle also forms a protective covering for important nerves and blood vessels that pass under it from the spine to the arms.

Soft Tissues of the Shoulder

The ends of all articulating bones are covered by smooth tissue called articular cartilage, which allows the bones to slide over each other without friction, enabling smooth movement. Articular cartilage reduces pressure and acts as a shock absorber during movement of the shoulder bones. Extra stability to the glenohumeral joint is provided by the glenoid labrum, a ring of fibrous cartilage that surrounds the glenoid cavity. The glenoid labrum increases the depth and surface area of the glenoid cavity to provide a more secure fit for the half-spherical head of the humerus.

Ligaments of the Shoulder

Ligaments are thick strands of fibers that connect one bone to another. The ligaments of the shoulder joint include:

Muscles of the Shoulder

Tendons of the Shoulder

Tendons are strong tissues that join muscle to bone allowing the muscle to control the movement of the bone or joint. Two important groups of tendons in the shoulder joint are the biceps tendons and rotator cuff tendons.

Bicep tendons are the two tendons that join the bicep muscle of the upper arm to the shoulder. They are referred to as the long head and short head of the bicep.

Rotator cuff tendons are a group of four tendons that join the head of the humerus to the deeper muscles of the rotator cuff. These tendons provide more stability and mobility to the shoulder joint.

Nerves of the Shoulder

Nerves carry messages from the brain to muscles to direct movement (motor nerves) and send information about different sensations such as touch, temperature, and pain from the muscles back to the brain (sensory nerves). The nerves of the arm pass through the shoulder joint from the neck. These nerves form a bundle at the region of the shoulder called the brachial plexus. The main nerves of the brachial plexus are the musculocutaneous, axillary, radial, ulnar and median nerves.

Blood vessels of the Shoulder

Blood vessels travel along with the nerves to supply blood to the arms. Oxygenated blood is supplied to the shoulder region by the subclavian artery that runs below the collarbone. As it enters the region of the armpit, it is called the axillary artery and further down the arm, it is called the brachial artery.

The main veins carrying de-oxygenated blood back to the heart for purification include: 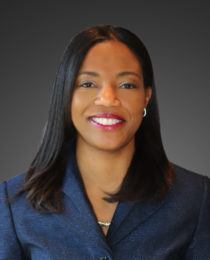 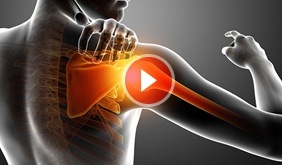